One of the strangest trigger I have is blinking. Especially in a bright place or under florescent lights. Its bothersome because there is nothing that I can do to avoid this trigger. What, maybe keep your eyes closed longer? Doesn’t work. It is so weird that out brain would choose something it needs to do to cause such pain.

I hope you are having a fantastic holiday. Yesterday we had our big celebration, right after Christmas Eve church services. I should have remembered to take a break for me time. I ended up in a considerable amount of pain and was very worn out before the end of the day.

My prayer for you is that you have fun, enjoy family, and take time for yourself.

I joined a group on Facebook that gives schizophrenics a place deal. Recently there are more and more posts about how Christianity is not real. Goes as far to say that every Christian should be put on medicine for schizophrenia because we believe in a God we cannot see and believe that God can talk to people. Because when Christians say that something extraordinary happens its real but when a similar thing happens outside Christianity its schizophrenics. Why would God allow this? or do it to me? When a Christian reaches out these people are quick to give their advice that God is not real. It is getting hard to read. I am a Christian.  My faith is what is getting me through this horrible ordeal. I feel a need to stick up God, myself, them.

I know what so say. I am very frustrated because everything I’ve tried to say something it has gone terribly wrong.

People tell me all the time that I’m on to much medicine, especially for my age. Apparently only old people are allowed to take handfuls of pills. Which I do. I take 6 different medicines in the morning and a different mess of seven medicines at night. My toothpaste is even prescription. Does that make me an old person? I’m 32. My nieces tell me I’m old.  Does the amount of medicine you have to take decrease your quality of life?

What I do know is I’m unlucky. I have three conditions that require medicine, a lot of medicine. Chronic migraines and head pain, seizures, and now depression and schizophrenia.

US Pain Foundation: Art through pain

Submitting a piece of my art might be fun but I have no idea what I would submit.  If you would like to think about it, the information and the link to submit is below.

To submit got to

Why I know Botox works

Every week I have some migraines, three or four. But come two weeks before my injection day I start having them every day again. It slowly gets worse over the course of the fourteen days. I have Botox in seven days. My migraine started around noon and is still horrible.

I thank God for the relief Botox brings. 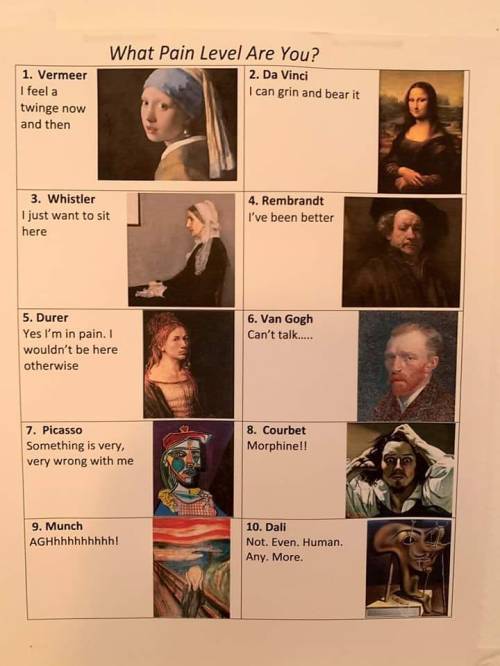 Mental Health is for Everyone 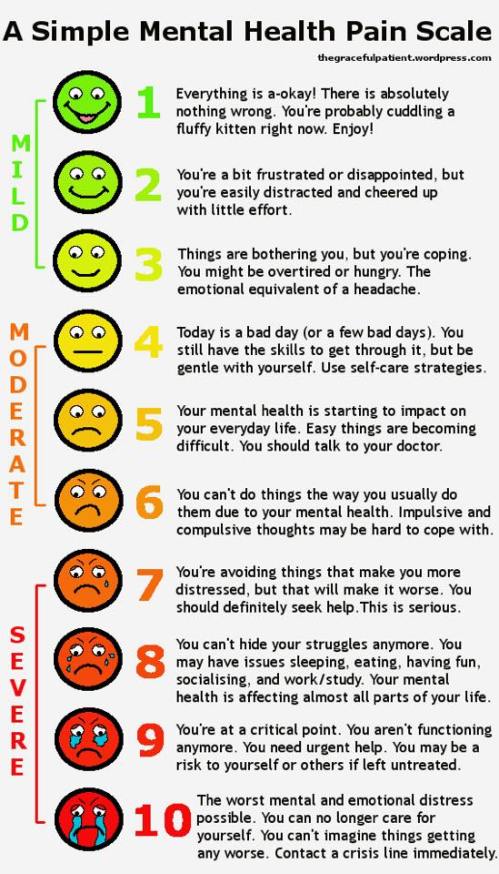 Everyone fits on this scale somewhere everyday. It is important to take care of your mental health, just as much as our physical health. Some ways to care for mental health are:

I have a terrible migraine right now.

I have schizophrenia and I’m not dangerous.

I received an official diagnosis a few months ago. A lot has changed since symptoms started but with medication the symptoms are under control and I’m considered high functioning. I never put anyone in danger and was not a danger to myself. More specifically I suffer from Scizoaffectiv disorder depression type. So I suffer from all the symptoms above accept mania. Mine are religiously based, demons and angels and one that claims to be a god. I believed I was an exorcists and and the voices were actually demons, angels, and God speaking to me. I know now it is hallucinations and delusions. And I’m doing better with the other symptoms that I experienced as I did. With medication and therapy I’m dealing the best I can.

Medicine really is a gift from God.